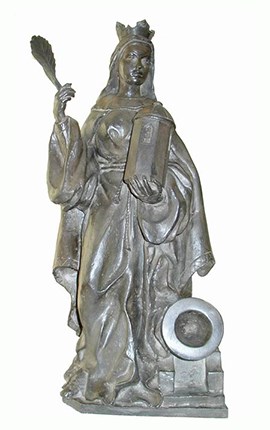 In the 15th century she was put to a group of Fourteen Holy Helpers.

As at almost all Holy Helpers, St. Barbara’s curriculum is completely covered with legends. They say that the girl lived in the end of the third century as a daughter of wealthy Dioscuros in Nicomedia, today’s Izmir, Turkey. Barbara’s exceptional beauty was admired everywhere, as well as her scholarship and bright intelligence. The richest and most handsome boys of the town sued for beautiful daughter from the pagan house, but she felt, that there must be something else in the life, so far uncovered to her, and refused every man.

Again and again left Barbara for the group of Christians living hidden, in permanent fear of Emperor’s persecutors. In the course of long talks the young girl tried to understand the faith and teaching of those people and more and more she became convinced that her further way of life is shown here.

Barbara’s Father Dioscuros, Christians’ fanatic enemy, became aware of the change with his daughter and decided to prevent his daughter from contacts with Christians. He had a tower built at his house to put Barbara there. When he returned from a short journey he could see that Barbara had directed the bricklayers to brick in three windows into the tower instead of two windows, planned by him.

Wild with rage, Dioscuros asked his daughter about the meaning of that change and Barbara answered him it was a symbol of the Holy Trinity. When Barbara told him that in the meantime he had been away she adopted Holy Baptism in secret, Dioscuros flared up with anger. He stepped to her wanting to beat her, but suddenly a crack opened in the earth and hid the girl.

Then Dioscuros dragged his daughter to the Prefect, a wrathful persecutor of Christians. The Prefect had Barbara scourged, beaten with clubs, burned with torches and cut her breasts away. When the Prefect learned that he reached nothing through that torture, he ordered that Barbara be beheaded. Dioscuros carried out that execution over his daughter with his own hands. No sooner had Dioscuros laid down the killing tool when he himself was struck with lightning and killed.

Saint Barbara became the Patron Saint in the end of the Middle Ages; the patronage relates to the legend, that a rock suddenly opened rendering a cover for Barbara on her run from her Father. There is also a song among the miners devoted to Barbara “Song to St. Barbara”. To avoid disaster and death in mines, the miners light the “Barbara’s Light”.

Since the fourteenth century Saint Barbara has belonged among the most popular and presented Saints.

Sv. Barbara
Barbara, Saint Virgin, Martyr of the Lord. She was born in Nicomedia of rich parents, against her Father’s will she became a Christian, she pledged her word to remain a virgin and remained Christian in spite of all Father’s persuasions. Her Father himself gave her away to a pagan judge who had her mercilessly tortured and sentenced her to death. Barbara’s own Father Dioscuros beheaded her with sword, but immediately after that he was struck with lightning and killed. All it happened under Emperor Maximinus’s persecution of Christians. Patron Saint Barbara is venerated as the patroness protecting against sudden and unexpected death. She is the Patron Saint of dying people, protects against thunderstorm and fire and belongs therefore to the Fourteen Holy Helpers. She is also the Patron Saint of artillerymen and miners; Saint Barbara is usually represented with palm, crown and tower; in French and Spanish battleships her portrait hangs on the chamber where gunpowder is placed, with the chamber itself being called “Barbara”. The feast of Saint Barbara falls on December 4th.